Notice the change in terminology in the Lumia family. There word Lumia is now appearing with Microsoft rather than Nokia. The Lumia 535 design is slightly different from the rest of the Lumia devices but it can still be easily recognized as “Lumia” from a distance. The one we got is a green color which also helps it stand out from the crowd.

The box is very similar to the Lumia 630 box. You get a slide-out box in you get a phone, getting started guide, charger and earphones. Earphones were missing in Lumia 630 box, so it is nice to see them in 535’s box.

You can find the rest of Lumia 535 unboxing pictures here. The exterior has a glossy finish which picks fingerprints quite easily. The back of the phone feels flimsy and not as solid as other cheaper Lumia phones like 630, 530 and 520. The green one shown below feels toy-like but the blue or white ones feels much mature. So get the blue or white one and avoid getting green and orange ones. 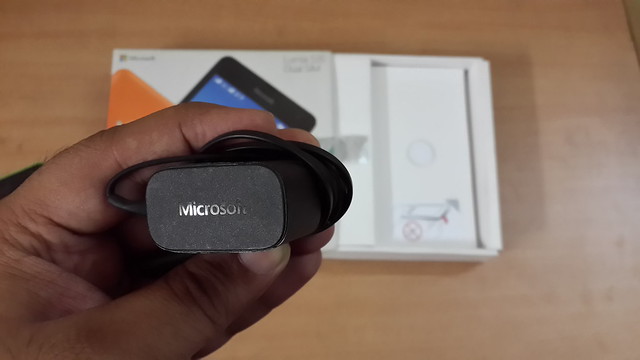 The Microsoft Lumia 535 is powered by quad core Snapdragon 200 processor which is a downgrade from Snapdragon 400 that powers the Lumia 630 and 830. While you would not notice a lot of difference in doing simple tasks, browsing in Internet Explorer does feels sluggish. We suggest getting class 10 micro SD card if you will be expanding its internal storage. Class 4 cards will simply make it feel slower. Fortunately you get a gig of memory which allows users to enjoy all games and applications available on the windows phone store. Even games like Halo run without problems. 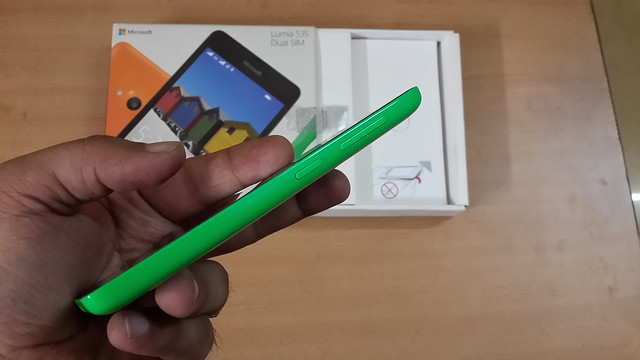 Make sure you get one from the fresh lot. The previous lot of Lumia 535 was riddled with display problems like unresponsive display. The new ones available at amazon do not exhibit this problem and for the old ones, Microsoft has rolled out an update.

The display measures 5 inches and is crisp even though it has only qHD resolution, which is same as the one found on iPhone 5S.

Camera quality of Lumia 535 is much better than android phones in the same range. The Lumia Camera does an excellent job in improving the camera quality. You can find review of its camera here

The battery life of Lumia 535 is stellar. It is user replaceable and offers great runtimes thanks to its power frugal Snapdragon 200 processor and beefy 1905 mAh capacity. Even after a couple of years of heavy use, you will be able to replace it at home by just ordering a new one from an online store.