Tom Warren, senior editor of the Verge has tweeted that Microsoft is already working on GDR3 update for the Windows Phone 8 devices. He has further confirmed that this will be the update that will bring full HD, a k a 1080p resolution support in the fastest growing mobile OS. 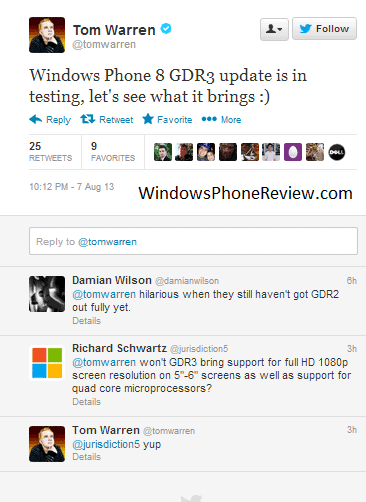 He added that it will also bring support for quad core processors which are not being offered in any Windows Phones right now. [via twitter]

GDR2 update did not bring any noticeable improvements from a consumer perspective and I hope there would be more than just better resolution and faster processor support in GDR3.

Windows Phone is a very efficient operating system and personally, I do not feel a need of having a quad core. That said, a bump in GPU power will be more appreciated by developers and users as they will be able to play games with richer graphics. Full HD resolution would be nice though and is something I would like on the rumored Nokia’s phablet.